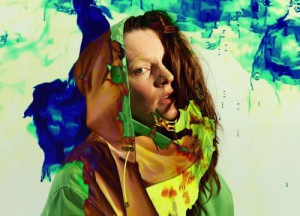 Disruption and interference aren’t words you ordinarily associate with pop or dance music, but Planningtorock is on a mission to unseat all norms. On her new album All Love’s Legal, she leaves you in no doubt as to the seriousness of her vision of transnational gender equality. Surprisingly, given that Western dance music is born out of black, queer music, it rarely touches upon these themes, but All Love’s Legal is a refreshingly direct statement of political intent.
For Jam Rostron, the Bolton-born, Berlin-based artist behind the multimedia recording and performance project Planningtorock, All Love’s Legal is both an extension of her previous work and a refinement and of its ideas and sonics. Planningtorock has always incorporated politics into her music, but this is by far her most explicitly political record yet. It follows W, which was released on DFA in 2011, and her 2006 debut album Have It All, as well as Tomorrow, In A Year, her acclaimed collaboration with Mt. Sims and The Knife. With a refined sonic palette, focused political intent, and a new name – having changed it from Janine to Jam – Planningtorock embarks on an exciting new phase.

Planningtorock is the scholarshipholder of the 3-months residency at the Villa Aurora L.A. in 2016.